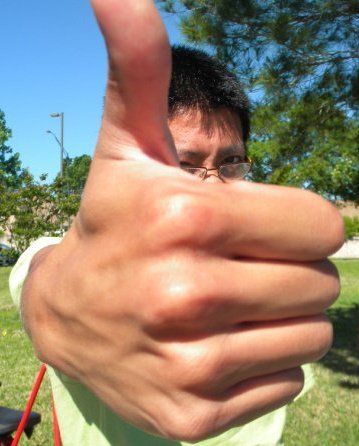 A closed fist with the thumb up is a sign of approval and of winning just about everywhere.  However, when Aggies give each other this sign, they accompany it with a hearty "Gig 'Em".  Rather than end a conversation with "goodbye," many conversations between Aggies end with "Gig 'Em" accompanied by the hand signal.

This tradition began at a 1930 Midnight Yell Practice held before the football game against the Texas Christian University Horned Frogs.  In an attempt to excite the crowd, Pinky Downs, a 1906 Texas A&M graduate and member of the school's Board of Regents, asked "What are we going to do to those Horned Frogs?"  Using a term for frog hunting, he answered his own question, "Gig 'Em, Aggies!"  For emphasis, he made a fist with the thumb extended.  The phrase and hand signal proved to be popular, and it became the first hand sign of the Southwest Conference.

To Aggies, "Gig 'Em" is encouragement to go out and do your best at whatever you are doing.  So, when you see some Aggies, give them a "Gig 'Em" and they will be proud to give you one right back.