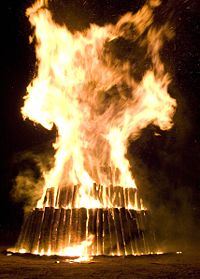 Aggie Bonfire was a long-standing tradition at Texas A&M University as part of a college rivalry with the University of Texas at Austin, known as t.u. by Texas A&M students.  For ninety years, Texas A&M students built and burned a large bonfire on campus each Fall.  Known within the Aggie community simply as Bonfire, the annual fall event symbolized the students' "burning desire to beat the hell outta t.u."  The bonfire was traditionally lit around Thanksgiving in conjunction with the festivities surrounding the annual college football game between the schools.

The first on-campus Aggie Bonfire was burned in 1909, and the tradition continued for the next 90 years.  For almost two decades, Bonfire was constructed from debris and pieces of wood that Aggies "found," including lumber intended for a dormitory that students appropriated in 1912.  The event became school-sanctioned in 1936, and, for the first time, students were provided with axes, saws, and trucks and pointed towards a grove of dead trees on the edge of town.  In the following years the Bonfire became more elaborate, and in 1967 the flames could be seen 25 miles (40 km) away.   In 1969, the stack set the world record at 111 feet (30 m) tall.

There have been two years that Bonfire did not burn.  First, in 1963, following the death of President John F. Kennedy, the senior class made one of the most difficult decision of their time at Texas A&M.  In honor of their president, they decided to dismantle the Bonfire, which had recently been completed. The head Yell Leader at the time, Mike Marlowe, was quoted as saying, "It is the most we have and the least we can give." 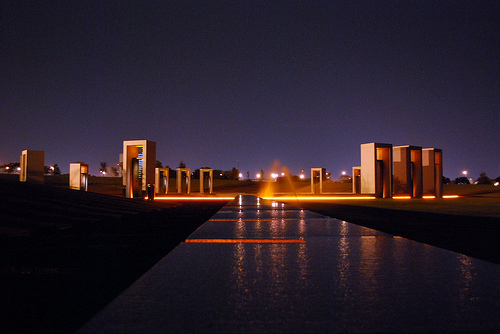 The second time that Bonfire was built and did not burn was in 1999.   At 2:42 AM on November 18, 1999, the partially completed Aggie Bonfire, standing 40 feet (10 m) tall and consisting of about 5000 logs, collapsed during construction.  Of the 58 students and former students working on the stack, 12 were killed and 27 others were injured.  On November 25, 1999, the date that Bonfire would have burned, Aggies instead held a vigil and remembrance ceremony.  Bonfire MemorialOver 40,000 people, including former President George H.W. Bush and his wife Barbara and then-Texas governor George W. Bush and his wife Laura, lit candles and observed up to two hours of silence at the site of the Bonfire collapse.  The Bonfire Memorial was officially dedicated on November 18, 2004.

Bonfire was postponed until 2002 in order to restructure it to make it safer. Delays in the development of a safety plan and a high estimated cost (mainly due to liability insurance), led A&M president Ray Bowen to postpone Bonfire indefinitely.  Despite the university's refusal to allow Bonfire to take place on campus, since 2002 a non-university sanctioned Bonfire has burned annually.  Known as Student Bonfire, the off-campus event draws between 8,000 and 15,000 fans.