The Fightin' Texas Aggie Band (also known as The Noble Men of Kyle or the Aggie Band) is the official marching band of Texas A&M University.  Composed of over 400 men and women from the school's Corps of Cadets, it is the largest military marching band in the world. The Aggie Band is nationally recognized for its precision military marching drills.  The band's complex straight-line marching maneuvers are performed exclusively to traditional marches.  Some of these maneuvers are so complex that computer programs used to create marching drills say they can't be performed because they require two people to be in the same place at the same time.

Since its inception in 1894, its members, known as BQs (for Band Qualified or Band Queer), eat together, sleep in the same dormitories, and practice up to forty hours per week on top of a full academic schedule.  The Aggie Band performs at all home football games, some away games, and university and Corps functions throughout the year.  Other events in which the band participated include inauguration parades for many United States Presidents and Texas Governors, major annual parades across the country, and the dedication ceremony for the George H. W. Bush Presidential Library.

From the first time you hear the Aggie War Hymn, to every time you sing the Spirit of Aggieland, the Aggie Band has always been able to capture the hearts of Aggies worldwide.  Also known as the pulse of Aggieland, their performance at football games has inspired awe as well as the phrase "Aggies may be outscored at the end of a game, but they never lose a halftime!" 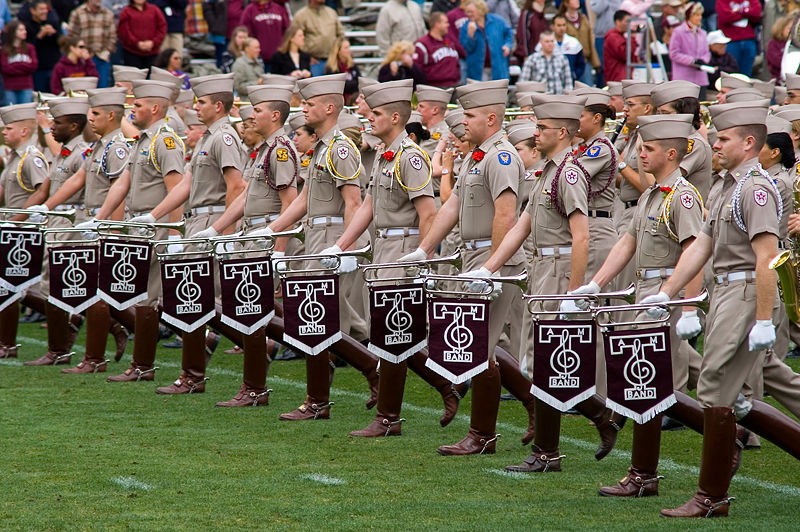