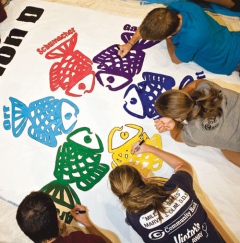 Fish Camp, a time-honored Aggie tradition, is one of the first introductions that many of the incoming freshmen have to the Texas A&M's traditions, spirit and family.  Freshmen are given the opportunity to learn Aggie traditions, ease their way into college life, develop leadership skills and create bonds that will last a lifetime.

Fish Camp is a four-day, three-night retreat.  The camp is held on the grounds of the Lakeview Methodist Conference Center near Palestine, Texas.  Since it was first held there in 1956, Fish Camp has expanded to accommodate more students as Lakeview has expanded its facilities.  The retreat is recognized as the largest student-run orientation program in the nation with over 1,000 student counselors serving more than 5,000 incoming freshmen each Fall.  Even with the emphasis on the sheer large numbers of students, Fish Camp continues to stress the importance of insuring that every individual Aggie walks away with a better perspective on college life and Texas A&M.

The entire camp system is broken down into seven sessions labeled A through G that occur in overlapping succession beginning in early August. Within each session are six camps of approximately 100-175 freshmen, 24 counselors and two co-chairs.  The colors are fixed (green, blue, aqua, red, yellow, purple) but each camp also has a namesake.  This person is "an individual that has contributed to Texas A&M in a positive way."  Fish Camp receives several hundred nominations for potential namesakes every year.  Nominations for potential namesakes are taken during the Fall and are announced the following February when counselors are selected for camps.