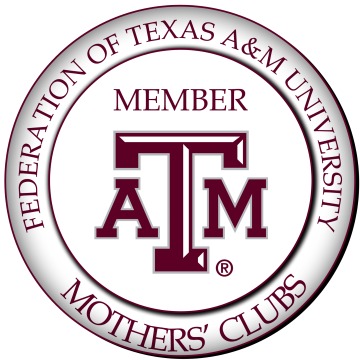 Mothers who are affiliated with the Texas A&M University Mothers' Clubs are members of a unique group.  As far as is known, Texas A&M is the only university in the United States where mothers are organized for the purpose of supporting their students and aiding in the promotion of the University.  Below is a brief history of the Mothers' Clubs, the Federation, and the development of both over the last 80 years.

In September 1921, Harold Peoples was a freshman at Texas A&M – an all male college with an enrollment of 1800 students.  Strict regulations restricted students to the campus and students were forbidden to have cars at school or to drive cars belonging to someone else.  The young men depended primarily on trains for transportation between campus and their homes, and if they needed to go to Bryan, they either rode the trolley or walked.  For long periods of time, the average student saw and communicated with no one other than his professors and fellow students.  Mrs. H. L. Peoples, mother of Harold, became concerned with the poor quality of life on the campus – no entertainment, no culture, and a complete lack of women's influence.

While attending a state PTA convention in San Antonio, Mrs. Peoples talked with Pat Neff, Governor of Texas at that time.  She expressed her concern at the need for parental guidance for the students to keep them from dropping out of school.  She believed that individual security and stability were products of strong ties with the home, and these traits extended into a student's activities at work, play, and school.

Mrs. Peoples decided to visit her son at College Station on her way back to Dallas.  When she arrived on campus, Harold was on a field trip.  However, she met a senior from Dallas who was impressed with her interest.  He told her that parents should not wait until graduation to visit their sons, but should become familiar with A&M during their student's freshman year.  While on campus, Mrs. Peoples also inspected dorm rooms and talked with other students.  She left College Station with a determination to do something for A&M students.

In February 1922, eleven interested mothers met in Dallas and the first Texas A&M Mothers' Club was organized with Mrs. Ada Brooks Allen Peoples as its president.  The club's objective was "to contribute in every way to the comfort and welfare of the boys and to cooperate with the faculty of the college in maintaining a high standard of moral conduct and intellectual attainment."  The objective remains the same today.

To determine the best steps to take, the eleven mothers decided to visit the campus.  Traveling in a caravan of Model T's over dusty roads, they presented themselves and their ideas to A&M; they were practically laughed off campus.  Undaunted, they organized a second caravan, and being wise mothers and knowing the way to a man's heart, they took with them fixings for what they called "a spread".  This consisted of fried chicken, sandwiches, pies, and cookies.  One hundred Dallas students, plus the President of A&M and his wife, attended the "spread" which was such a success it became an annual affair and was extended to include the entire student body.

Ada Peoples realized that the tender little things the mothers did for their students did not go far enough; many students in the state of Texas had the ambition of an education, but not the money.  With this in mind, that first mothers' club in Dallas established a student loan fund.  Today, many of the clubs consider scholarships their most important contribution to the students.

Interestingly, a man – Dr. H.B. Stout, initiated the second club, in Fort Worth.  At that time, Dr. Stout, a Methodist minister, was president of Texas Women's College in Fort Worth.  He had a personal interest in the project, as his son, Stephen, was an A&M student.  Dr. Stout placed the following ad in the Fort Worth Star Telegram in October 1922:  "All mothers of boys who are attending A&M College will meet at a luncheon Wednesday noon.  The A&M Mothers' Club will be formed".

The mothers' club idea spread rapidly, and eight clubs became a Federation in 1928.  The Federation Board of today consists of fourteen elected women and several appointed positions that serve as a coordinating board for the 122 clubs.  There are now clubs in Texas, Louisiana, Missouri/Kansas, New Mexico, Oklahoma and Georgia with a paid membership of almost  8,000 mothers.  Mothers who live out-of-state or more than 25 miles from a mothers' club may apply to the 8th Vice President of the Federation to become "adopted" by an existing club.  These mothers may also seek to start a new club by contacting the 1st Vice President.

In spite of the expansion, the objective of the mothers' clubs remains the same today.  From the largest membership of over 400 to the smallest, all clubs have the same goal – that of banding together for the benefit of the A&M student body.  The mothers also experience a companionship they cannot experience elsewhere.  A club meeting is a place to share joys and sadness, success and setbacks.  The mother of a student who has failed a course is sure to have her worries eased when another mother tells her, "Yes, that happened to my student as well, but in a few months he will graduate."

The mothers are continually looking for ways to serve Texas A&M University.  The list of their accomplishments is long, varied, and impressive.  The Aggie Band, the Corps of Cadets, the Endowment Fund for the Sterling C. Evans Library, Fish and Transfer Camps, Peer Orientation Conferences, and 650 plus campus organizations have benefited from their support.  During the 2008-2009 year, the individual mothers' clubs sent $485,054 to Texas A&M University, including $326,300 for scholarships.  The mothers' clubs have a close working relationship with the President of Texas A&M as well as other administrators.

The Federation of A&M Mothers' Clubs has three meetings on campus each year; a meeting the Saturday before the Fall semester begins, one the Saturday after the start of Spring classes, and the final meeting of the year on Parents' Weekend.  During this meeting, the election and installation of Federation officers is held.  It is also the time and site of the World's largest Aggie Mom Boutique (more than 300 tables of craft items).  This is a major fund raising event for the clubs.  In 2008, proceeds from boutique were $388,121.  In addition to the regular meetings on campus, the Federation holds its annual Aggie Mom Camp in the Fall.  This is a great weekend filled with fun, games, and spirit.

The Texas A&M Mothers' Clubs are proud organizations – proud of Texas A&M, proud of the daughters and sons they send to A&M, and proud of making a contribution to the education of their students and to the future of A&M and the state of Texas.