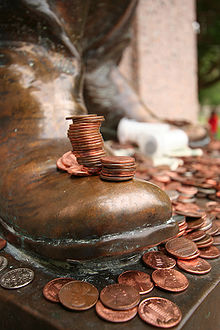 Many students believe that they will do well on exams if they make an offering to Lawrence Sullivan "Sul" Ross.  Ross, the president of Texas A&M in the 1890s, is credited with saving the school from closure. A ffectionately known as "Sully," many believe him to be "the embodiment of Aggie Spirit and tradition."  A&M legend states that Ross would often tutor students, and as payment would accept only a penny for their thoughts.  At exam time his statue, located in Academic Plaza, is often covered in pennies.