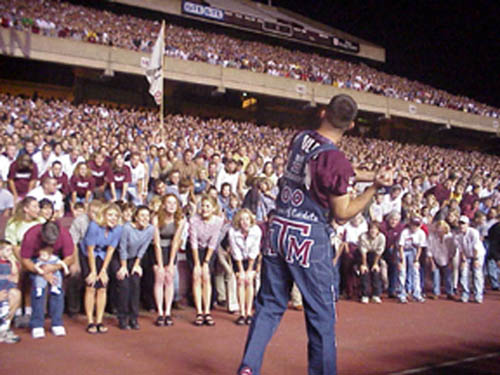 The purpose of any Aggie yell practice is to build enthusiasm and spirit for an upcoming athletic contest.  Under the direction of Yell Leaders, Aggies show their support for the team by shouting Aggie yells with spirit and singing Aggie songs with pride.

Yell practice began as a post dinner activity in 1900's, when different Corps companies would gather together to "learn heartily the old time pep."  However, it was not until 1931, that Midnight Yell Practice, as it is known today, was held before the Texas University game.  It began, when a group of Cadets were gathered in Peanut Owen's dorm room in Puryear Hall.  Someone suggested that all of the freshmen should fall out and meet on the steps of the YMCA building at midnight.  The Cadets notified senior Yell Leaders Horsefly Berryhill and Two Gun Parker of their intent.  Although it could not officially be authorized, they said they may just show up.  Needless to say, the word spread quickly, and when the freshmen began to arrive, there were railroad flares and torpedoes stuck in flower pots around the YMCA building to light the area.  The first Midnight Yell had begun!!!

Today, Midnight Yell is held the night before a home game in Kyle Field and at the Arches on Thursday nights before away games.  Also for an away game, a site is designated for a Midnight Yell in the city of the opponent the night before the game.  For example, for the Texas University game, it is held at the Texas Capitol in Austin.  For a yell at Kyle Field, Yell Leaders lead the Fightin' Texas Aggie Band and the 12th Man into the stadium.  The Yell Leaders lead the crowd in old army yells, the school's songs, and tell fables of how the Aggies are going "to beat the everlivin' hell out of our opponent."  Finally, the lights go out, and Aggies are expected to "mug down", that is, kiss their dates.  If they don't have a date, all they have to do is“flick their Bic.” As the story goes, the flames make it easier for two dateless people to find a kiss!

Aggies practice their yells again after each football game.  If the team is victorious, the freshmen in the Corps of Cadets capture the Yell Leaders on Kyle Field and march them across campus to be dunked in the Fish Pond across from the All Faiths Chapel. The very wet Yell Leaders then make their way to the YMCA Building, where the Fightin' Texas Aggie Band and members of the crowd join them for a short yell practice in preparation for the next week's game.  If the team is "outscored" or "runs out of time" (Aggies never lose), a mini-Yell Practice is held in Kyle Field before the crowd disperses.

In September 17, 1999, a new tradition was formed… First Yell (the first Midnight Yell of the school year) brought with it many related activities for everyone including concerts, BBQ, and a Former Yell Leaders Reunion.   First Yell was started by the Yell Leaders as a way of welcoming all Aggies, current and former students, back to campus.  First Yell occurs on the weekend of the first home football game and includes several different events.  The featured event of the weekend occurs on Friday night before Midnight Yell Practice. The Yell Leaders host a major performance in Reed Arena, which features the best student talent on campus, as well as a world class entertainer.