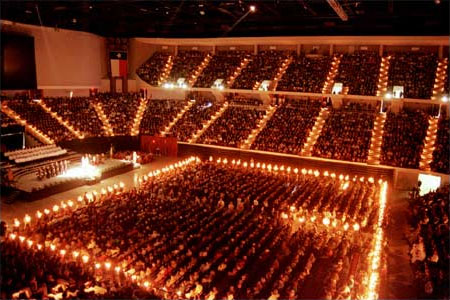 Aggies gathered together on June 26,1883 to live over again their college days, the victories and defeats won and lost upon the drill field and in the classroom.  By April 21, 1903, this annual gathering evolved into a celebration of Texas' Independence on San Jacinto Day.  These early meetings included field games and banquets for Aggies to reflect and celebrate their memories of Aggieland. 'Let every alumni answer a roll call' wrote the former students.  It was not until 1922, however, that April 21 became the official day of events for all Aggies, thus, the annual tradition of Muster was born.  The March 1923 Texas Aggie urged, 'If there is an A&M man within one-hundred miles of you, you are expected to get together, eat a little, and live over the days you spent at the A&M College of Texas.'

Still remembering and honoring the time spent in Aggieland, the tradition of mustering has grown in strength, meaning, and spirit.  By 1929, the meeting had grown worldwide, and in 1942 Aggie Muster gained international recognition. Twenty-five men, led  by General George Moore '08, mustered during the Japanese Siege of the Philippine island of Corregidor.  Knowing that Muster might soon be called for them, these Aggies embodied the essence of commitment, dedication, and friendship – the Aggie Spirit.  They risked their lives to honor their beliefs and values. That small group of Aggies on an outpost during World War II inspired what has developed into one of our greatest traditions.

Muster is celebrated in more than four-hundred places world-wide, with the largest ceremony on the Texas A&M campus in College Station.  The ceremony brings together more Aggies, worldwide, on one occasion than any other event.

The students of Texas A&M University coordinate the Campus Muster. Because Muster was established to bring Aggies together, each Campus Muster is dedicated to the fifty-year reunion class.  The Campus Muster involves an entire day of activities for students both present and past.  Alumni enjoy a special program including tours of the ever-changing campus. At noon, all Aggies congregate at the Academic Plaza for the Camaraderie Barbecue that rekindles the tradition of the original Muster celebration. MusterThat night, the Muster ceremony consists of an address by a keynote speaker, the reading of poems, followed by the Roll Call for the Absent. The Roll Call honors Aggies that have fallen since the last Muster roll was read. As the names are read, a friend or family member answers 'Here', and a candle is lit to symbolize that while those Aggies are not present in body, they will forever remain with us in Aggie Spirit. 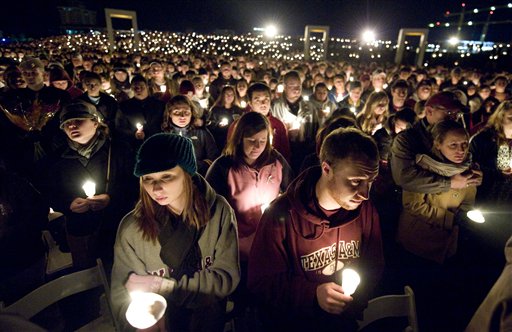 Muster is a time to look to the past, present, and future…not only to grieve but to reflect and to celebrate the lives that connect Aggies to one another.  A gesture so simple in nature yet so lasting in spirit, Muster is the lasting impression every Aggie leaves with; it reminds them of the greatness that lies within the walls, of the loyalty they possess, of the connection that binds them, and of the idea that every Aggie has a place of importance – whether they are present in flesh or spirit.