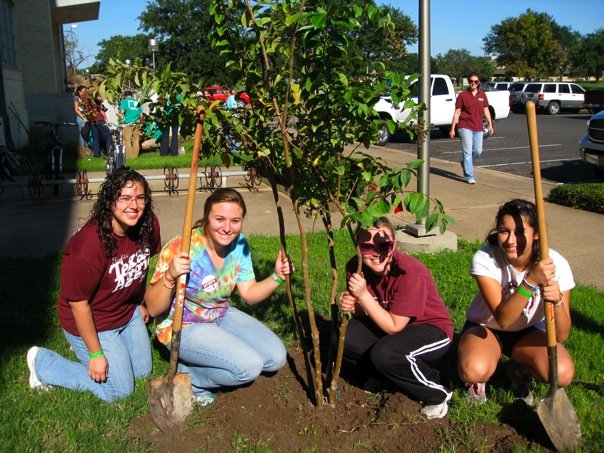 Replant is one of the largest student-run, enviromental service projects in the nation.  It was orginally developed by Scott HantmanReplant to replenish some of the trees cut for the Bonfire.  In the Spring of 1991, he joined Bonfire leaders and planted 400 trees.  In 1994, it became a Student Government Association committee that works year-round coordinating the event. They are sponsored by Texas A&M, the National Tree Trust, and the Army Corps of Engineers at Lake Somerville.  Thousands of trees are planted each year by hundreds of student volunteers from A&M and the Bryan/College Station area. Trees are planted at local parks, schools, and other public land properties.  All trees are donated by the National Tree Trust (between 500-10,000 per year)

Up until 1999, Replant Day was held in the Spring, however the low survival rate of the trees was an issue. After much debate, Replant Day was moved to the Fall.  The survival rates of the young trees increased to an estimated 90%. In 2009, Replant Day was one of the largest student-run environmental service projects in the country, hosting over 1200 Aggie Students plant over 300 trees on the University, City of College Station and the City of Bryan.