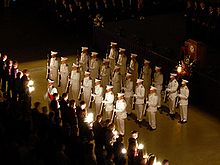 By far, one of Texas A&M's most honored traditions is Silver Taps.  Silver Taps is held for a graduate or undergraduateSilver Taps student who passes away while enrolled at A&M.  This final tribute is held the first Tuesday of the month following the students'  passing.

The first Silver Taps was held in 1898 and honored Lawrence Sullivan Ross, the former governor of Texas and president of A&M College.  Silver Taps is currently held in Academic Plaza.  On the day of Silver Taps, a small card with the deceased students name, class, major, and date of birth is placed at the base of the Academic Plaza flagpole, and the Silver Taps Memorial located behind the flagpole.  Around 10:15 that night, the lights are extinguished and hymns chime from Albritton Tower.  Students silently gather at the statue of Lawrence Sullivan Ross.  At 10:30pm, the Ross Volunteer Firing Squad marches into the plaza and fires a twenty-one gun salute.  Buglers then play a special rendition of Silver Taps, by Colonel Richard Dunn, three times from the dome of the Academic Building: once to the north, south, and west.  It is not played to the east because it is said that the sun will never rise on that Aggies life again.  After the buglers play, the students leave from Academic Plaza in complete silence.  Silver Taps is a sacred tradition that Aggies treasure dearly.