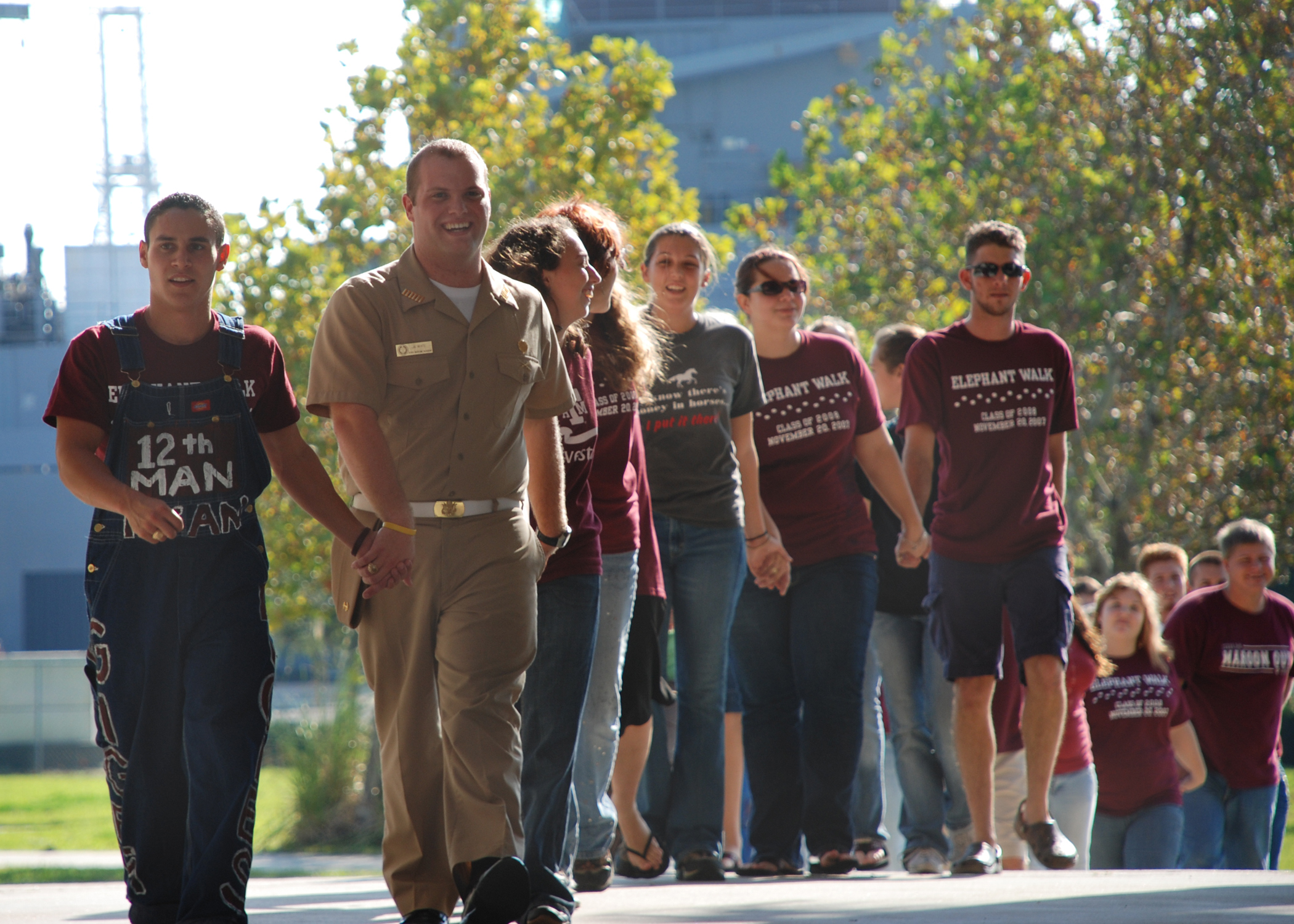 As old elephants wander off and die when they are of no further use to the herd, symbolically so do Aggie seniors who will no longer be members of the 12th Man.  Elephant Walk is a time for seniors to reflect on their days at Texas A&M as they gather together, join hands, and wander aimlessly about the campus like dying elephants seeking a secluded spot to end their days as active members of the12th Man.

Every November, in the week of the football game against the University of Texas, the senior class gathers together for Elephant Walk.  The University of Texas game is always the last football game of the regular season, so Elephant Walk has come to symbolize the end of the seniors' "usefulness" to the 12th Man and the passing of the torch to the junior class.  Seniors meet at Kyle Field for a yell practice and presentations.  Leaders of the graduating class also announce the class gift to the University.  Afterwards, senior Yell Leaders will lead the group through campus visiting landmarks for the symbolic "last time."  The seniors will stop at Fish Pond, the Lawrence Sullivan Ross Statue, and the Corps Quadrangle for brief yell practices before heading out to the Bonfire site on the Polo Fields.

In a reference to Elephant Walk, seniors in their last semester of study are often called "dead elephants."  This Aggie tradition is known to underclassmen as "E-Walk" since it is bad for underclassmen to say the word elephant as it is classified as a "senior word."

It all started in 1922.  Two Aggie Band Fish from the Class of 1926 wandered out of Kyle Field after the football team was outscored the second time in the first two weeks of the season.  They began to play a mournful funeral march.  The goal of the march was to break the "jinx" that haunted Aggie football at the time.  One by one, others joined the march, creating a long, serpent-like column that wandered throughout the campus.  For the rest of the season, the Fish continued their walk regardless of whether or not the football team was outscored.  After their freshman year, the Class of 1926 discontinued their marches throughout campus.

During their senior year, the Class of 1926 decided to give one last walk to show their spirit for the A&M College of Texas.  The other three classes on campus at the time had never seen the ceremony.  Led by the same two Fish, the seniors rested one hand on the shoulder of the Aggie in front of them and walked around campus as they did when they were freshmen, only this time they were wearing their senior boots.  Because they walked single file, with a hand on the shoulder of the person in front, an observer remarked that they "looked like elephants, about to die."  The seniors cried as they walked through the campus, remembering good times and bad, buddies for life, and those that had fallen along the way.  The Class of 1926 "died" much in the same fashion as elephants do in the wild.  Thus, the solemn tradition of Elephant Walk was born.