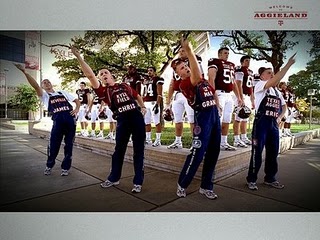 Although nationally known for their spirit, the Texas Aggies have no cheerleaders. This is because they have no school cheers.  Instead, there are a variety of school yells used by the 12th Man team (the student body) in support of the team on the field or court.  Yell Leaders do not perform gymnastic feats, but instead use hand signals, known as "pass backs", to direct and intensify crowds.  After the signals are passed through the crowd, the Yell Leaders give the signal to "hump it", where the crowd leans forward and places their hands on their knees to maximize the noise.  The Yell Leaders have a dozen yells that they can choose from depending on the situation. While some yells are designed to praise and motivate the team, others exist solely to make fun of the opposing side.

When A&M was an all-male military college in 1907, students often invited ladies from Texas Women's University to take the train to College Station to attend Aggie football games.  Then as now, a certain amount of tickets were set aside for guests, and these would be handed out based on seniority, so freshmen were rarely able to bring guests to the games.  According to legend, during one football game the Aggies were being out-scored so badly that the ladies were threatening to leave the game from boredom, and the upperclassmen ordered the freshmen, or "fish,” to find a way to entertain them. The freshmen raided a janitor's closet and changed into the white coveralls they found there, and began leading the crowd in yells from the track in front of the stands. The freshmen got so much attention from the ladies that it was decided that only upperclassmen would be allowed to participate in this entertainment in the future.