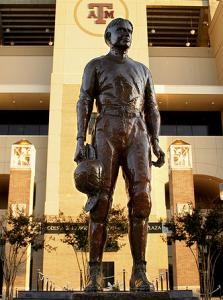 The tradition of the 12th Man was born on the second of January 1922, when an underdog Aggie team was playing Centre College, the nation's top ranked team at the time.  As the hard fought game wore on, the Aggies were forced to dig deep into their limited reserves because of injuries.  Coach Dana X. Bible remembered that a former squad member, who was playing basketball at the time, was in the press box helping reporters identify players.  His name was E. King Gill.  Gill was called from the stands, suited up, and stood ready throughout the rest of the game, which A&M finally won 22-14.  When the game ended, E. King Gill was the only man left standing on the sidelines for the Aggies.  Gill later said, "I wish I could say that I went in and ran for the winning touchdown, but I didn't.  I simply got ready and waited–just in case I was needed."

12th manThis gesture was more than enough for the Aggie Team.  Although Gill did not play in the game, he had accepted the call to help his team.  He came to be known as the "12th Man”because he stood ready in case the eleven men on the gridiron needed him.  That spirit of readiness for service, desire to support, and enthusiasm helped kindle a flame of devotion among the entire student body; a spirit that has grown vigorously throughout the years.  The entire student body at A&M is the 12th Man, and they stand during the entire game to show their support.  In a further show of respect, the students step "off the wood" (step off of the bleachers onto the concrete) whenever a player is injured or when the band plays the Aggie War Hymn or The Spirit of Aggieland.  The 12th Man is always in the stands waiting to be called upon if needed.

In the 1980's, the tradition was expanded as coach Jackie Sherrill created the 12th Man squad.  Composed solely of walk-on (non-scholarship) players, the squad would take the field for special teams performances.  This squad performed very well and held opponents to one of the lowest yards per return averages in the league.  Later, Coach R. C. Slocum amended the tradition in the 1990's to allow one walk-on player, wearing the No. 12 jersey, to take the field for special teams plays.  The player is chosen based on the level of determination and hard work shown in practices.  Coach Dennis Franchione has continued Slocum's model, while also keeping an all-walk-on kickoff team that played three times in the 2006 season.

A statue of E. King Gill stands to the north of Kyle Field to remind Aggies of their constant obligation to preserve the spirit of the 12th Man.  During the mid-80's, fans also began waving 12th Man Towels during the game to show their support of the team on the field.  Because the students are always waiting for the opportunity to support their team, they are also willing to take the credit for the team's good deeds. A popular Aggie tradition is that "when the team scores, everybody scores."  Whenever the Aggies score points during the game, students kiss their dates.