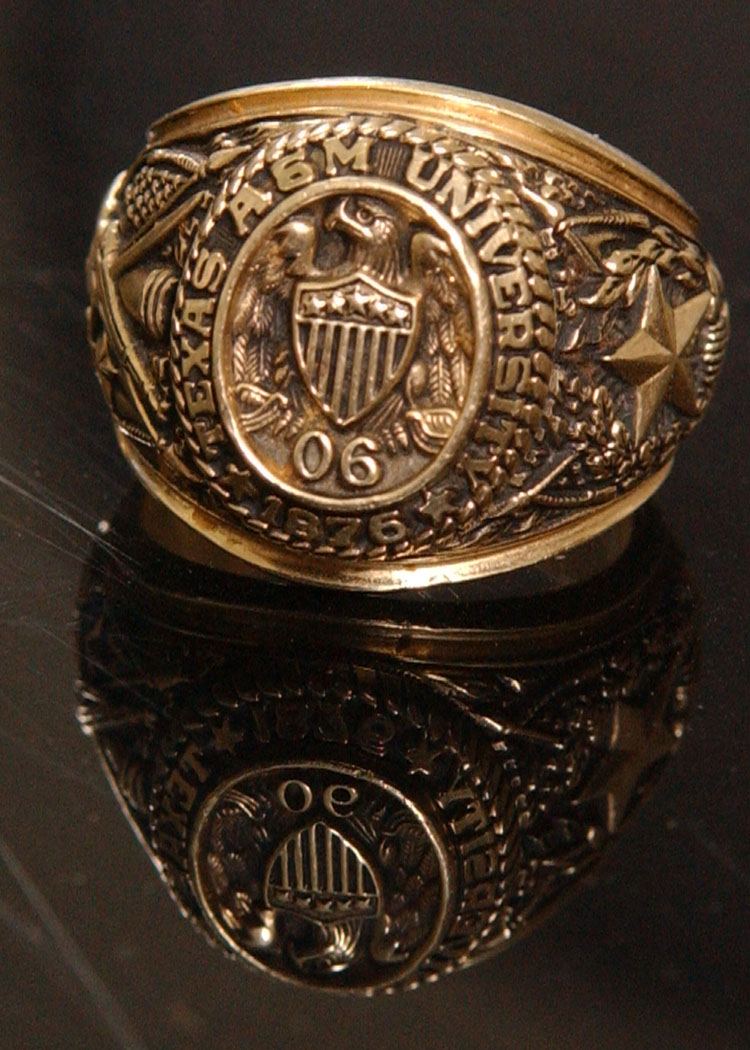 The Aggie Ring is rich in symbolism, tradition, and memories.  One of the greatest moments in the life of every Aggie is the day that he or she receives an Aggie Ring.   Seniors and graduates wear their class rings with pride while underclassmen look forward to the day when they have earned the right to wear it.  Unlike many other universities, Texas A&M class rings may not be ordered or worn by an Aggie until that student has become a senior.   To be eligible to order the ring, an undergraduate must have a minimum 2.00 GPA on a 4.00 scale.  In addition, the student must have at least 95 semester hours with 45 hours at Texas A&M and be in good standing with the university.  Graduate students may receive a ring after 75% of their graduate coursework is completed or after the acceptance of their dissertation or thesis.  Thus, the ring has become a symbol of countless long hours of work and study.  Traditionally, students wear their ring with the class year facing them to signify the fact that their time at A&M is not yet complete.  During Senior Week at the annual Ring Dance, the student's ring is turned around to face the world proudly, just as the Aggie graduate will be ready to face the world.  The ring worn by all Aggie graduates is the same except for the class year. This serves as a common link for former students.  When an Aggie sees the ring on another Aggie's hand, a spontaneous reunion occurs.

This tradition began with the Class of 1889.  The original rings were very different from the one worn today because, at that time, several companies made different versions of the Aggie Ring.  It wasn't until E.C. Jonas, Class of 1894, designed a ring for his class that the ring we know today came into existence.  It has remained exactly as Jonas designed it, with one exception; in 1963 the Legislature of the State of Texas changed the university's name from the Agricultural and Mechanical College of Texas to Texas A&M University, and the name on the ring was changed accordingly.

The Aggie Ring is one of the most symbolic of A&M traditions.  Everything seen on the ring represents a value that an Aggie should hold.  On the top is a large shield, which symbolizes the desire to protect the reputation of the university.  The 13 stripes on the shield represent the 13 original states of America.  The five stars on the shield refer to the phases of development of any Aggie: mind or intellect; body; spiritual attainment; emotional poise; and integrity of character.  The eagle symbolizes agility and power, and the ability to reach great heights.  The large star on the side of the ring symbolizes the Seal of Texas.  The five-pointed star is encircled with a wreath of olive and laurel leaves symbolizing achievement and a desire for peace.  The live oak leaves symbolize the strength to fight for our country and our state.  The leaves are joined at the bottom by an encircling ribbon to show the necessity of uniting these two traits to accomplish one's ambition to serve.  An ancient cannon, a saber, and a rifle are on the other side of the ring and symbolize how citizens of Texas fought for their land and are determined to defend it.  The saber stands for valor and confidence, while the rifle and cannon stand for a preparedness and defense.  The crossed flags of the United States and Texas recognize an Aggie's dual allegiance to both nation and state.