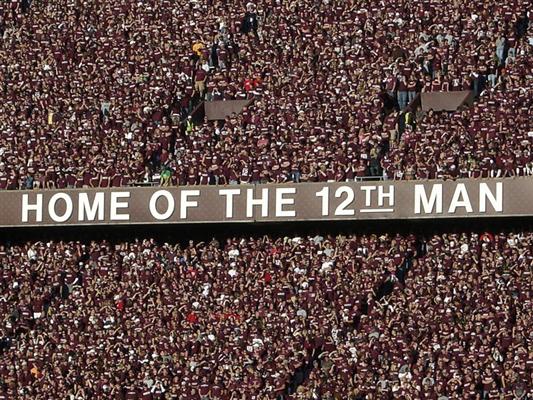 One of Texas A&M's newer traditions is Maroon Out, which began in 1998. The football team had ended their 1997 season with a lopsided defeat to Nebraska in the Big 12 Championship Game. Several Aggie students noticed how united the Nebraska fans seemed, all dressed in red. They proposed that Texas A&M attempt to "Maroon Out" Kyle Field for the October 10, 1998 rematch against Nebraska and formed an organization to sell maroon t-shirts at a low cost to students. This resulted in the sale of 31,000 Maroon Out shirts, leading to a temporary national shortage of maroon t-shirts.

The Aggies defeated Number 2 Nebraska 28-21, the first time in six seasons that Nebraska had lost a regular-season conference game. The Daily Nebraskan noted that "A game that was dubbed a 'maroon-out' for Texas A&M fans proved to be lights out for Nebraska. The fans dressed themselves in maroon T-shirts in an attempt to wash out the red and white that opponents have gotten used to. It worked."

Since then, one football game each season is dubbed an official Maroon Out and discounted maroon t-shirts are for sale for fans. Through 2005, Texas A&M has been 6-1 in Maroon Out games, beating 5 teams ranked in the Top 25, despite being the underdog in each of the games. The basketball team has a similar tradition, called a "White Out," where fans are encouraged to wear white t-shirts.

Perhaps the most memorable Maroon Out moment was not maroon at all. After the events of September 11, 2001, five Aggie students wished to help honor America. They decided to ask the attendees of the next A&M football game, which would be held at Kyle Field on September 22, 2001, to wear patriotic colors. The colors would be divided by deck, with the upper deck wearing red, the middle deck wearing white, and the lower deck in blue. Within a five-day period the students had contracted with several printers to create special t-shirts which read "Standing for America" and the date. Despite initial concerns about not being able to sell enough shirts to be effective, the students sold about 70,000 of these shirts, raising over $150,000 for the relief efforts.